“Pertaining to: Evacuation of Jews”

Münster, Rheine, Ahaus, Borken, Coesfeld, Warendorf, Borghorst, Oelde, Laer, Südlohn, Epe, Werne, Ibbenbüren, Gescher – these are just a few of the places in Münsterland from where Jewish residents began to be deported to Riga in early December 1941. The first deportations starting in autumn 1941 completed the step from marginalization, disenfranchisement and expulsion in the “Greater German Reich” to the systematic deportation and murder of German Jews in occupied Eastern Europe.

A passenger train of the German national railway left the station in Münster on 13 December 1941 with 390 Jews from Münsterland, stopping in Osnabrück and Bielefeld to pick up another 222 and 419 Jews from Lower Saxony and Westphalia respectively. The “special train” reached Riga in German-occupied Latvia on 16 December 1941 and the ghetto that had been established a few months earlier. Of the 1,031 people deported on this transport, just 102 men and women survived the National Socialist terror and mass murder, the internment, and the forced labour in Riga.

There were a total of 25 transports to Riga between November 1941 and October 1942. Approximately 25,000 people of Jewish origin were deported to Riga from 13 points in the “Greater German Reich”, of whom only about 1,000 survived.

The “evacuation” order issued by the Münster Gestapo, 18 November 1941

On 18 November 1941, the Münster Gestapo instructed the municipal authorities in the district of Münster to prepare for deporting Jews in the region to Riga, which was to take place on 13 December. The Jews were to be “handed over” in “Gertrudenhof”, a Münster restaurant with a large hall, by 11 December. 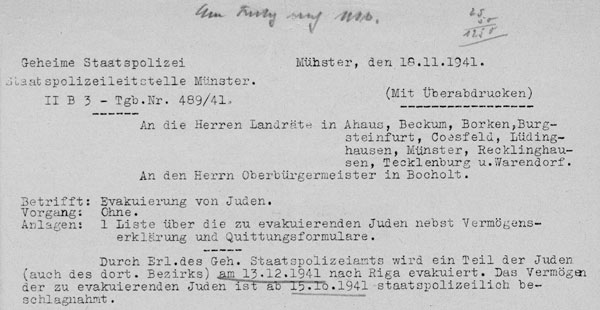 The Gestapo order had two goals in mind. On the one hand, to seize the property and assets of the “Jews to be evacuated”, the confiscation being followed by plundering and expropriation. The towns and local communities in particular, as well as the treasury, enriched themselves, while those deported lost their house or flat, their money and valuables, their clothing, furniture … On the other, the Gestapo issued instructions on what the deportees should take with them on the transport and what was forbidden.

Document of the perpetrators:

The “List of evacuating Jews from the area of the Münster Gestapo to Riga”, 10 December 1941 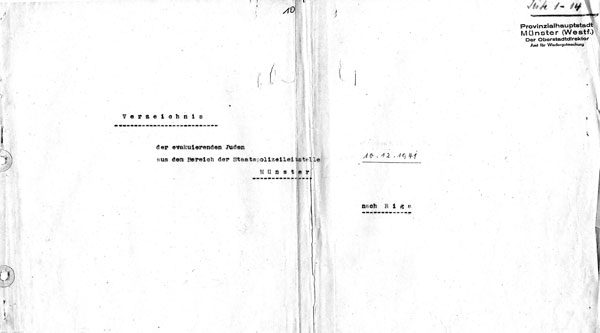 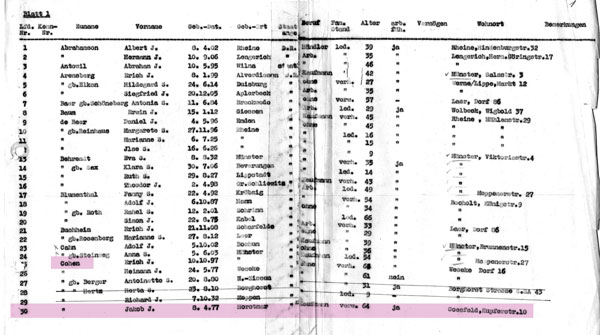 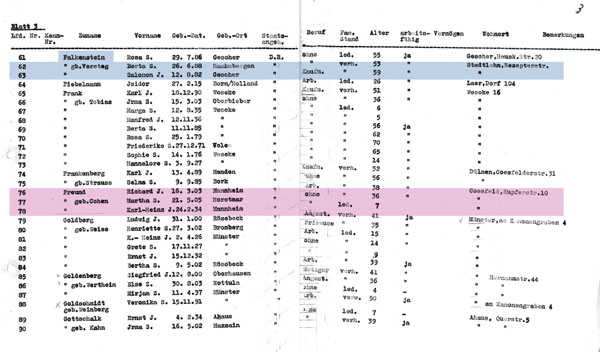 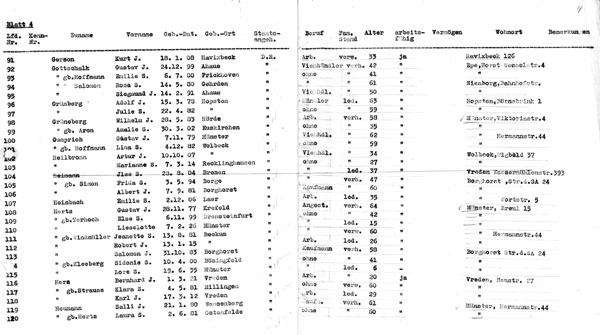 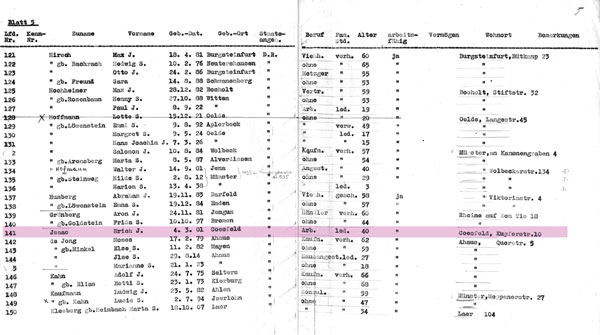 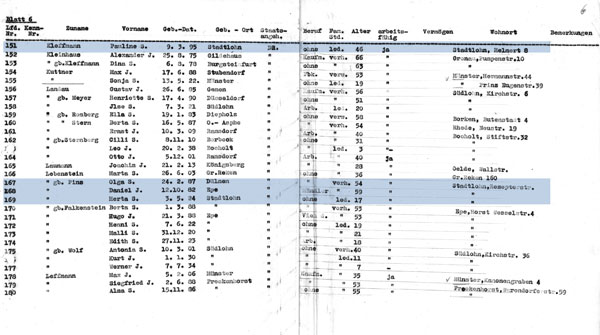 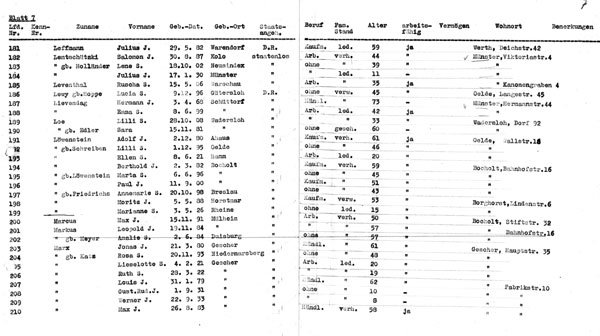 No photos of the deportation in Münster have survived, but there are photos for Bielefeld, where the transport from Münster and Osnabrück made a further stop. The Bielefeld photo series was officially commissioned by the city for the “war chronicle”, and shows the collection point and railway station from where the Jews were deported by force. 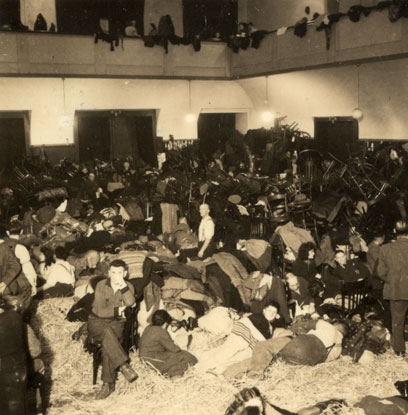 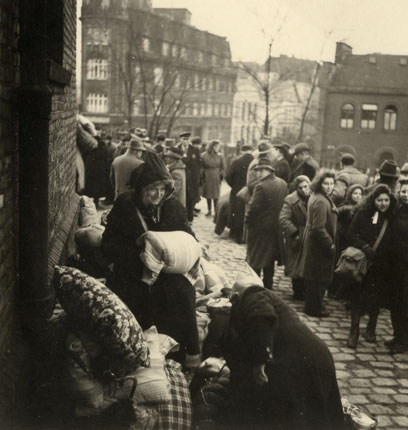 The “Kyffhäuser” restaurant served as a collection point for the Jews of East Westphalia; they were registered and searched there. On the morning of 13 December 1941, they were taken to the main railway station, where they joined the deportees from Münster and Osnabrück, and were placed in the empty 3rd class passenger coaches. A 15-man escort squad of the order police (Ordnungspolizei) was responsible for guarding them at the station and during the transport to Riga. 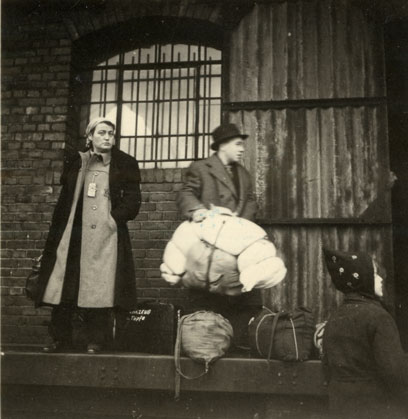 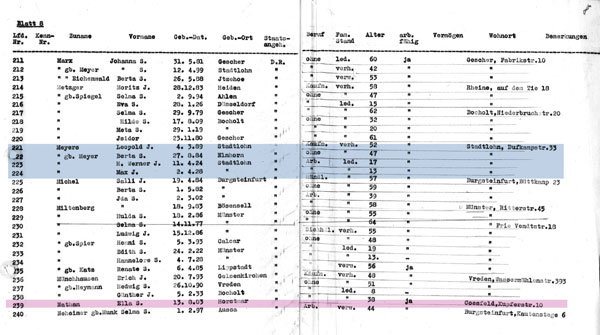 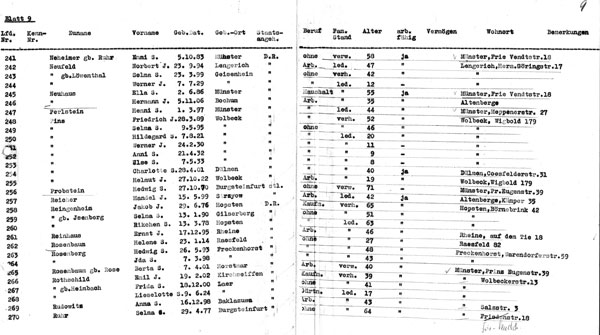 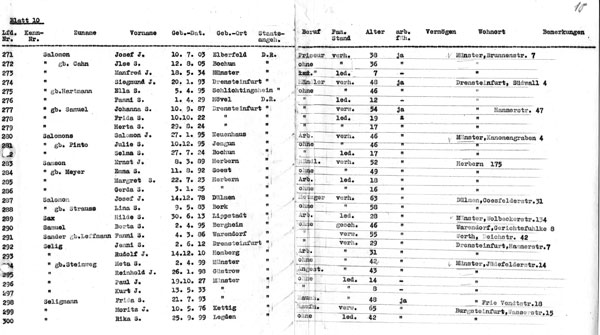 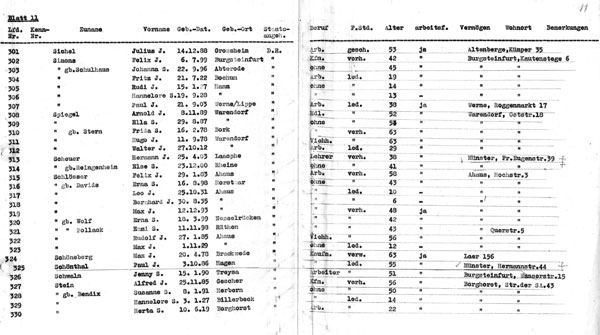 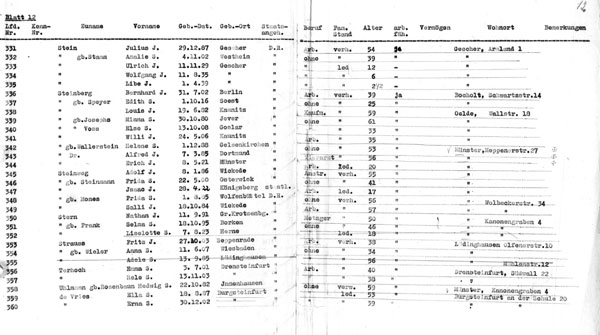 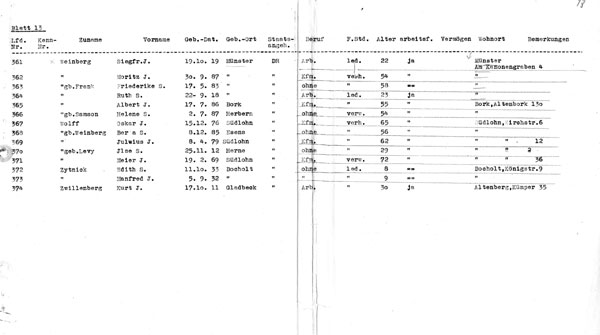 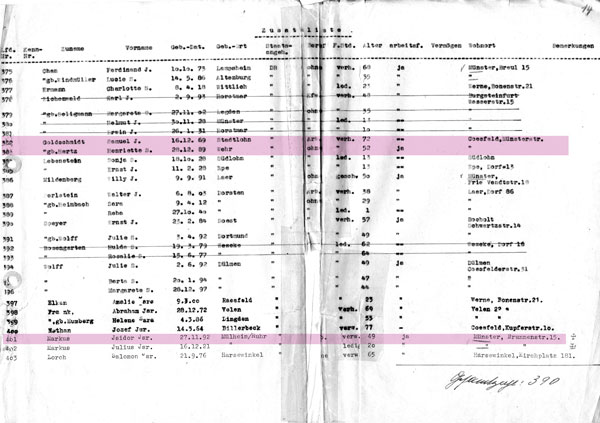 Explanation:
from 1 January 1939, Germans of Jewish faith had to adopt an additional first name that identified them in official documents as a male or a female Jew: “Israel” for men and “Sara” for women, abbreviated as “I” or “S”.

“After a two-day journey in an unheated train, we arrived at the loading station in Riga. But we had to stay on the train all night. The next morning, when it got light, we saw deep snow all around us. We realized that we were in the East; the severe cold made itself felt. A little later the SS came with rubber truncheons and drove us off the train. So we had a nice reception right away and a little foretaste of our future life”.

Born in Münster, Irmgard Heimbach (1927-2013) was deported to Riga from Osnabrück with her parents on 13 December 1941. She was almost 14 when they arrived at Skirotava station. The family’s ordeal points to a number of Shoah crime scenes in Riga. Upon arrival, the family was interned in the newly established “Jewish ghetto” in Riga’s Moscow suburb.

Father Siegfried Heimbach did forced labour in the construction of the Salaspils concentration camp, succumbing to the inhumane working and living conditions as early as the beginning of April 1942. Mother Henny Heimbach and daughter Irmgard survived the forced labour in the war economy. When the ghetto was dissolved in 1943, they were transferred to the Kaiserwald concentration camp, and in October 1944 back to the Stutthof concentration camp near Danzig. After liberation by Russian troops at the end of January 1945, Henny Heimbach and her 18-year-old daughter Irmgard returned to Osnabrück in the summer of 1945.

Deportation memorial in Münsterland and Riga

The culture of commemorating the Shoah in the Federal Republic has changed considerably since the 1980s, not least at the regional and local level. Life stories and family histories have been studied, and the focus is now on commemorating people by name. The paths of fate are named and linked to the places of deportation and extermination at home as well as in formerly occupied Europe.

Only in post-Soviet times, after the fall of communism in 1989/90, has it been possible to develop a culture of public commemoration to the victims of the Shoah in Latvia, one that takes into account both the local Latvian Jews and the deported German Jews. The sites of the mass shootings in the forests of Rumbula and Bikernieki, a few kilometres outside Riga, are worthy memorials today.

About 8,000 Latvian Jews and about 12,000 German Jews were shot in Bikernieki from December 1941. The memorial, built in 2001, is maintained by amongst others the German War Graves Commission (Volksbund Deutscher Kriegsgräberfürsorge) in cooperation with the German Riga Committee. From a German perspective, Bikernieki is the central memorial site for the German victims of the Riga deportations. 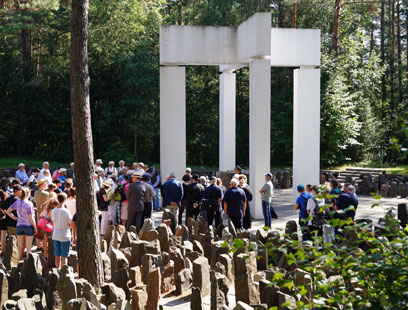